Controlling any pests starts by knowing the type of pests that are inside the premises. Stinging insects such as wasps, bees and hornets are some pest problem that can be experienced by many. However, the most common questions regarding insect classification surrounds the differences between the different types of stinging wasps, bees, and hornets.

They are fuzzy, flying insects with yellow and black stripes.

Bumble Bees - These bees are commonly seen buzzing on flowers. They help in pollinating plants and gather nectar to make honey. However, they do not make nearly as much honey as honey bees. They are also not aggressive as they go from flower to flower and they are more interested with the flowers than with the people around them. But, when it comes to their nests, they can be pretty aggressive and they will not hesitate to sting if they feel they are threatened. Bumblebees nests can be found anywhere such on dry grass clippings, piles of dried leaves, insulation, porch furniture cushions, discarded mattresses, and the like. They can also nest underground or on patios or sidewalks.

Honey Bees - They are one of the most beneficial insects known to us since their role is to pollinate all different types of fruits and vegetable crops. And, because honey bees are important to our eco system, major precautions are also taken to preserve them. Honey bees that are found in a hollow tree or beekeeper’s box are alright, however, when they invade our home, this can be quite a nuisance. Their hives can create tens of thousands of workers and this can create a lot of problems when they nest inside a structure such as a home. If you find the crack or crevice that bees enter, do not seal the entrance hole shut first. Since honey bees are beneficial to man and the environment, every effort should be taken first to transport them into a suitable location. However, if this is not possible, the only last resort is to get rid of the bees and their nest.

Wasps are about one-third inch to one inch long. All wasps are made as predator or parasite of other insects or are developed as scavengers. They also have a minor role in pollination and have much less “hairy” body than bees.

Parasitic Wasps (Braconidae and Ichneumonidae). Parasitic wasps are non-aggressive creatures although they may have a long, scary looking stinger, which is used primarily to lay eggs. If they do sting however, they may just cause a little pain. They are called parasitic wasp because they lay their eggs in some insects. And, while their young develop on their host, their host will inevitably die in the process.

Solitary Hunting Wasps (Sphecidae and Pompilidae). To create a nest, the female will create rearing cells in some kind of nest, then hunts for a prey and paralyzes it and return it to the nests cell. When the cell is ready, it will lay its eggs together with the prey and seals it. Sphecid wasps hunt insects while pompilids hunt spiders. Some pompilipid wasps can create the most painful sting, while sphecid wasps have a mild sting.

Social Wasps (Vespidae). This group commonly encounters human contact and an unfortunate number of stinging incidents, with the overwhelming stinging incidents is caused by the yellow jackets. These wasps commonly creates a paper nest that is hidden to many. They also have a diverse taste and can feed on some insects, sweets and protein-rich foods. This group of wasp can be a complete nuisance in outdoor dining areas in late summer and around uncovered garbage. 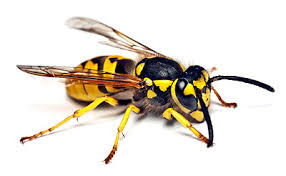 Hornets commonly make paper closed nests in trees, shrubs and under eaves that may even surpass the size of a football. They create a paper-like nests out of wood fibers and their saliva. Hornets are more aggressive than wasps since they can sting anyone even without much provocation, and like wasps, they can sting anyone repeatedly. If your home has a bald-faced hornet, better call a pest control professional to remove its nest.

Horizon Pest Control can effectively remove wasp, bees and hornets in and around your home. Our qualified exterminator will make sure that these stinging insects will never go back to your place! To request a FREE initial consultation, click Yard Pest Control.